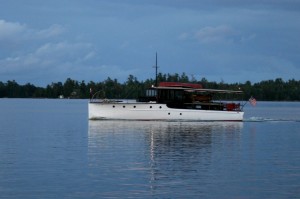 Many wooden boats have played a part in the enjoyment of the waters of Rainy Lake, one of which belonged to Major Roberts. VIRGINIA is now the grand dame and largest private pleasure craft on the lake, a literal living legacy. She is a 50′ ELCO from Bayonne New Jersey, named after the Major’s daughter, a talented artist with a sparkling personality, who studied at the Sorbonne in Paris. After a 25 year hiatus in her 88 year history, VIRGINIA was brought back to Rainy Lake by her captain James Hanson (part of the second generation of the current owners) who independently manages her care and association with the island.

The Duke of Windsor, Charles Lindbergh, and a Dupont or two all had ELCOs.